skip to main | skip to sidebar

A bow thruster is a transversal propulsion device built into, or mounted to, the bow of a ship or boat to make it more maneuverable. Bow thrusters make docking easier, since they allow the captain to turn the vessel to port or starboard without using the main propulsion mechanism which requires some forward motion for turning. A stern thruster is of the same principle, fitted at the stern.

Large vessels usually have one or more tunnels built into the bow below the waterline. An impeller in the tunnel can create thrust in either direction which makes the ship turn. Most tunnel thrusters are driven by electric motors, but some are hydraulically powered. These bow thrusters, also known as tunnel thrusters, may allow the ship to dock without the assistance of tugboats, saving the costs of such service. Ships equipped with tunnel thrusters typically have a sign above the waterline over each thruster on both sides, a big white cross in a red circle.

Tunnel thrusters increase the vessel's resistance to forward motion through the water, but this can be mitigated through proper fairing aft of the tunnel aperture. Ship operators should take care to prevent fouling of the tunnel and impeller, either through use of a protective grate or by cleaning. During vessel design, it is important to determine whether tunnel emergence above the water surface is commonplace in heavy seas. Tunnel emergence hurts thruster performance, and may damage the thruster and the hull around it. 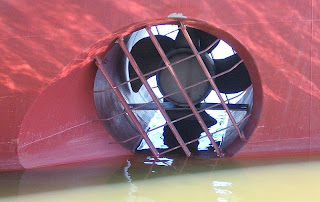 nasz playersz
I thrive on conquering the impossible. If you tell me it can't be done, I'll find a way to do it and surprise you. I believe in taking charge of my destiny so I set very high goals and I don't stop until I achieve them....